What a beautiful day it was today in Seattle, it started off as a cloudy morning as usual then the sun broke through and produced some amazing shine on the clouds! Today I met up with John Cornicello who is one of the main assistants at creativeLIVE for lunch at Blue Moon Burger (fantastic food by the way). We had a fantastic lunch and then we went back to John's place to meet his wife and grab some props for the photo of him.

I saw his epic 4x5 large format camera and knew that would be an epic prop and tell the story about him and his photography he does. We packed all the gear into the car and headed to Gasworks Park in Seattle. If you're looking for a great place to see the skyline from, Gasworks has it! My goal for this photo was to tell the story of him being a photographer and represent his style which is very classy, almost older looking photos. I wanted to have the Seattle skyline in the background because that's where he lives and the Space Needle is very iconic. For the lighting, I wanted a soft light so I went with an octa and a small softbox in the back for a rim light to make him and the camera pop.

The photo was shot on a Canon 5d Mark II with an 85mm f/1.8 Lens at f/4 with a 3 stop ND filter on it so I could shoot at a wide aperture and still use a flash. My lighting system is a Profoto 7b, and I had that at quarter and 1/8th power.

Here's an iPhone HDR photo of the setup (the camera moved a bit so it's blurry but it kinda makes a cool effect. And lastly, here's a shot John took of me taking the photo of him. :) 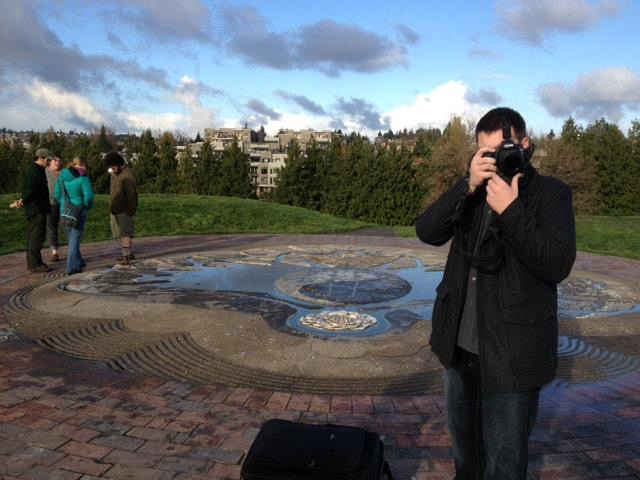