I decided to do a small photo project in Seattle. The goal was to find someone in need, buy them dinner, and get to know them. I wanted someone to feel like someone cares about their life that other people just walk past and ignore when they are standing on the corner asking for change.
After sitting on a corner watching people for about a half hour waiting for the right person, I decided to walk down a few more blocks to 5th and Pine at Westlake Center, it is there I found Eddie. What stood out to me about Eddie was he was selling the "Real Change" newspapers for $1 but he wasn't pedaling them hard like the other people were. I walked up and asked him if he'd join us for dinner and he said he'd love to. We went to McDonalds on 3rd and Pine and got a Big Mac with some coffee.
We sat and talked for a good hour and a half about his life and how he got to Seattle. He told us many compelling stories, many of which I will keep private, but he also talked of his ironic arrest stories. This guy has been arrested in Nevada for the most insane things, such as attempted jay-walking, which is where the crosswalk is walk, turns to the red flashing hand, and you turn back around without actually crossing. Yes, he got arrested for that, jailed for 30 days. Another time he got arrested for open container after being bumped into by a woman while standing by the door of a casino, he was pushed out the door with a beer in his hand and caught the woman from hitting the sidewalk. Well, a police officer saw that and noticed the beer in his hand and guess what, arrested him. I told him he should write a book about his arrest stories.
I asked where he lived and he told me of his tent about 10 miles out of town, he said it's covered in mud. He's looking to find something, anything with a roof. He was $3 short on getting a monthly bus pass so he could save up for an apartment and still get back and forth. He was hoping to sell at least another 3 newspapers so he could reach his goal. I reached in my pocket and handed him $5 to get his pass plus another meal. After dinner, we went back to 5th and Pine where I first saw him for a photo.
He had a job interview the following morning with a local downtown ambassador agency. He said he knows all the guys and is sure he will get the job so he can get back on his feet again. I handed him another $20 to get a haircut and some food later and wished him luck with the interview. My friend Katie handed him her gloves so he could stay warm in the cold Seattle winter.
I look forward to seeing him again next time I'm in Seattle, hopefully he'll be wearing a yellow vest with the word "ambassador" on the back.
That was a New Years I will never forget. 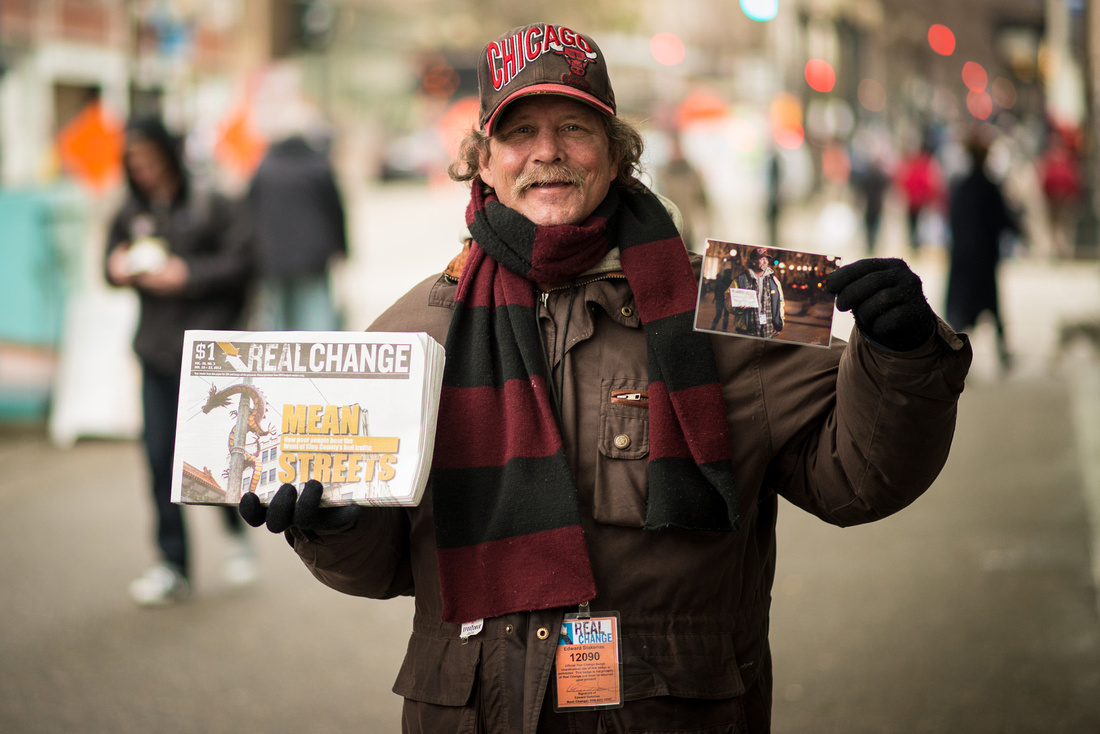 Barbara(non-registered)
The world needs more people like you in it, someone that takes the time to really get to know someone without judging them. Everyone has a story, and everyone needs a friend to listen and let them know they can make it. Him meeting you and your friend, made him feel he's a normal person and there are still good people in the world. A friend of mine was homeless, wrote a book and is doing great now. Everyone has a story and everyone needs a friend to share that story with.
Awesome story!
Teri Lou Dantzler(non-registered)
How wonderful that you finished your project! Great stories!
No comments posted.
Loading...
Subscribe
RSS
Recent Posts
A Little Out of the Ordinary Desiree + Kyle // Engaged - Spokane Wedding Photographer Benjamin Powell Trying Something Different How to Photograph Fireworks How to Fix Not Being Able to Type Caps in Photoshop Philip Vukelich Behind the Scenes: Always Reckless Doug Webster How to Turn Off Facebook Notification Sounds
Keywords
photo camera photos photographer photography how idaho to digital dslr
Archive
January February March April May June July August September October November December
Copyright 2008-2020 Matt Leitholt, All Rights Reserved.
User Agreement
Cancel
Continue